You are here: Home » Blog » Behold the Injected Brisket…. 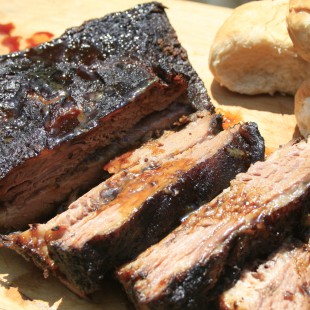 I could alternate between pulled pork shoulder and brisket every other week, when I’m in the groove. In fact, I often do. I realize that brisket challenges a lot of people, and it should. It’s an un-tender cut of meat, and no butcher in their right mind is going to sell it to you in a size that’s less than four to five pounds; a full brisket for a party will easily double that. It does not yield easily or logically to the knife when raw, the grain seeming to run every which way but loose.

To my knowledge, the only way to get brisket to a point where you can sink your teeth into it and not have it fight back is something you’ve no doubt heard time and time again: low and slow. No amount of pounding, marinating, brining, or what have you will take this from moo to table worthy in a flash. Of course, this is just what makes it perfect for the smoker. 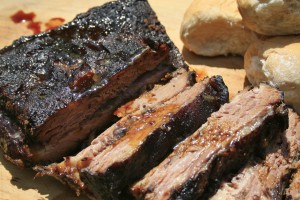 There are probably as may ways to smoke a brisket as there are to smoke any other food. I change it up every time, but I have fallen into a kind of rhythm with mine, and I think I may have found a route to get me what I want. In fact, I like it so much that, while I may change up the spices and what not, I may not use another method of getting complimentary flavors into a brisket, while ending up with a succulent hunk of meat in the end. I’m talking about injecting. 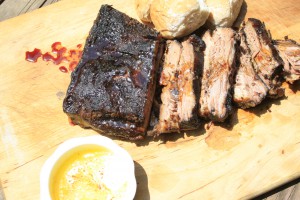 I’ve injected before and had good results. But mostly that was back when I was married in the mid-2000s and my then-husband and I were cooking with our neighbors two and three times a week. My injector got buried in a garage box of unused kitchen equipment after the divorce, first in Nebraska, then in Texas. I finally uncovered it after two years here in Wisconsin, but it proved to have suffered in its long-term storage. I couldn’t get the plunger to do its job, and the result was a whole lot of marinade all over everything—including me—but whatever it was I intended to marinade. I threw it in a kitchen catch-all drawer, glared at it now and again until this past winter of unending Polar Vortexes showed signs of, well, ending. Three clicks on Amazon and $30 later, and I had a new injector.

I first used it on a chicken, then on a pork shoulder, both with beautiful results, so long as I was doing my part—that means sticking the needle way into the meat so that it’s properly buried past each and every one of those damn holes in it. In other words, I do laundry right after I use the injector.
Anyway, spraying myself with marinade aside, I did a brisket this weekend. I kept it simple: About a cup of apple cider, quarter-cup of brown sugar, half-stick of melted butter, a solid tablespoon of both cayenne and cumin, and probably a teaspoon or two each of fine sea salt and ground black pepper. In injected it at different levels, trying to follow the advice I’ve seen and work the needle into different areas of the meat through the same hole, so as not have everything you just put in your meat run right back out. I’ll admit, I’m a little aggressive with this, but it seems to work for me. I smooth a little extra of the marinade all around the brisket (or pork shoulder, or cluck), and into the smoker it goes.

Here’s where the rhythm part comes in. For me and the average five-pound brisket, whether I’ve marinated it, brined it, dry rubbed it or injected it, what seems to work for me is to start with six hours naked, three of those hours with smoke (I ran smoke, maple, continuously for two hours, broke for an hour, then dosed the smoke for another hour, so nine wood discs total). Once I hit somewhere around the five to six hour range, depending on the fat cap I started with and how it looks in general, I then double-foil wrap the meat, including the leftover marinade I had from my initial injection work or a fresh batch as needed. Seal it up tight. Back in the smoker until its gone 12 to 15 hours in the 210- to 225 degree range. The only time I’ve been disappointed with this was when I single-foil wrapped it. (For all those inquiring minds, I had two identical, triangular-shaped briskets that I’d produced by cutting a bigger brisket diagonally in half, marinating each in their own different marinade, then dry rubbing before the smoker. 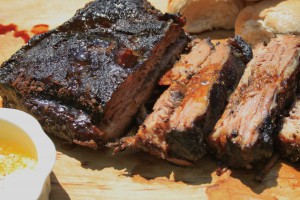 One half turned out great, the other half a bit dry. I mused to a friend that this was all the same brisket, how could one half end up dry. He said brisket’s just like that—sometimes it gives you the finger no matter what you do. Fair enough, but I’m blaming it on the single-foil layer.)
Anyway, being, as I said, fairly well practiced at briskets and rarely being disappointed with the tenderness and flavor when I’m done, I have to say that the injection is the way to go. I also think melted butter should be part of that injection. We’ll see—this is my third success with a butter-based injection, and there are certainly other things that can be needled into meat. But aside from, perhaps, a need to call your cardiologist afterwards, I think butter is key. Oh, and yes, as you can see from the picture, I did dip the chunks of gorgeous, tender, lusciously wet brisket in melted butter and put them on soft, warm, yeast rolls. That’s just how I roll.

One last note. Obviously, if you need this kind of dish for a party, you’re going to need to start either in the pre-dawn hours or at midnight, depending on how big and thick your brisket is. Bigger takes longer, just the name of the game; some can take 20 hours and more, depending, of course, on your temperature, temperature regulating, and other smoking factors. But if you can’t tell from the pictures that this is something worth setting the alarm for … well, then I guess you probably know the quickest rout to McDonalds, eh?

By the Bacon Maven